This is a set of nine videos on DVD with a users guide sold separately. The DVD  set contains all of the nine stories. Tweaky the hummingbird and his friends teach us nine different character traits in this set: respect, responsibility, perseverance, caring, self-discipline, citizenship, honesty, courage, and fairness. There is a song to go with each character trait, which is sung by one of Tweaky's friends. The story and songs are done in such a way that you are definitely drawn into the story.

The teacher's manual is 112 pages long and is designed to be used in a classroom, but it is easily adapted for homeschooling or individual use. Each trait is set up to be done as a "trait of the month," and each trait has a corresponding project. For each trait you can print the words of the song, including the music with guitar chords noted. There is a paper-bag puppet craft and a refrigerator magnet craft for each trait, as well as an award sheet that can be printed off for each student at the end of the month. There are also discussion questions to go with each lesson that will help your child think about what was taught in the story.

The teacher's manual is well laid out and includes lots of fun stuff to do. After having time to look over this product, I do think it is a good value for the money and a simple way to incorporate character training into your child's day while having fun at the same time.
Nicole Teichroeb
The Old Schoolhouse Magazine 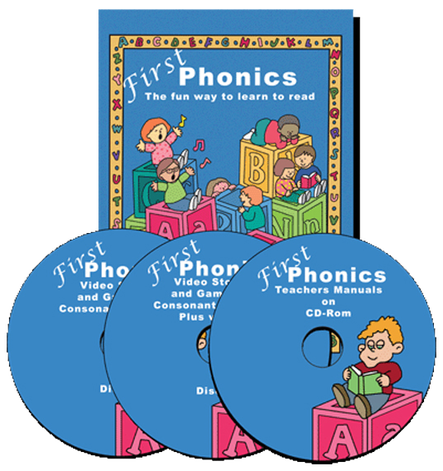 First Phonics DVDs is a set subtitled "the fun way to learn to read." Two DVDs contain videos for all 31 stories. The stories emphasize the sound of each letter, such as "Bad Billy Bear Bursts Balloons" for the letter "B" or "Casper Cat Catches Caterpillars" for the letter "C." The stories themselves are not alliterated like the titles, but they teach character lessons using animals as the main characters. The author reads the story as the colorful characters interact throughout the story. There are phonics games that correspond to the letter sound. An original song accompanies each story and make learning the letter sounds fun and easier to grasp. There is a CD-rom which contains all three teacher's manuals to assist in lesson planning, crafts, and learning pockets (a pocket folder for flashcard homework intended to be sent home with a child from school).

This resource could be used for classrooms or homeschools, but it seems to lend itself more easily to homeschooling. The teacher's manual contains a plethora of ideas for teaching the letter sounds including:

· craft that corresponds to the story, complete with templates and instructions

I would put this resource in the kindergarten age range, but it may be more suited to preschoolers for some. The resource would probably have to be used by a parent and student together, in order to move back and forth between the menu items. My first grader liked the stories and the games but thought the songs were a bit long. (They are repeated several times between the video book and the game.)

This resource retails for $20. Having taught several children to read, I don't believe that this resource will actually teach your child to read. It would, however, make a good supplemental activity to your systematic teaching of phonics and reading skills. Children who love listening to a computer read a book will probably like it. For someone wanting some direction in teaching basic phonics skills to their 3 to 6-year-old, this would be an excellent resource.
Kim Kargbo
The Old Schoolhouse Magazine
There is a complete phonics curriculum available at:
First Phonics Curriculum
Return to Bookstore
Proudly powered by Weebly